Free Chapter Audio Book Download from my book Living in the Pause: Life After Addiction, Divorce, and Business Loss is available now for free download.

I have recorded and released the audio for the  Audio Book version of the Preface, Introduction, and 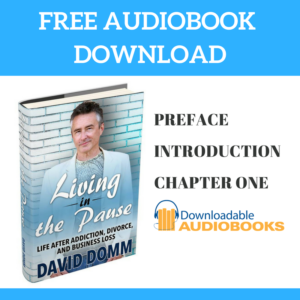 Chapter 1 from my new book.

Being able to give away a free chapter audio book download in this way is also a great way to let people get a taste of what’s happening between the covers of the book.

I wanted to release a Free Chapter for my new book but I realized you can almost get that much from Amazon these days and I wanted to provide something that is not available elsewhere.  I also think that the audio conveys some of the emotions and feelings that sometimes print doesn’t quite do for some people.  The full audio book will be out soon as we’re working diligently on several aspects of the campaign. By the time you read this Free Chapter Audio Book Download post, the audio book might just be available.

Here is some of the Preface in print as well…. Enjoy

After a business failure in the summer of 2008 I had a sinking feeling that what was left of my twenty-year marriage was hanging by a thread. That summer I went to Phoenix to live and work with a friend. Together we partnered with another friend and began a new business.

Despite the pressure, my resolve was strong and the business did very well; things were looking up.  We quickly grew to employing more than a hundred people and did well over a million dollars in revenue within seven months. I was making more money than I had ever made before and my self-esteem, shattered from previous business failures, was slowly being put back together.

However, we did so well that we unfortunately caught the attention of a corporate raider who, from the inside out, was able to destroy everything we built. In one day we went from making millions to making absolutely nothing… you can guess what happened to my self-esteem…

I went back home to my family feeling like a failure, but I was more determined than ever to overcome the loss so I started yet another business. This business also did well. However, right before an investor was to write a check for five-hundred-thousand dollars for a first round of funding, a programmer from San Francisco, who was sent to vet the deal, decided he wanted the company, told the investor to get lost and in the process destroyed everything I had built. Once again, I was left with nothing.

To make matters even worse, in between these business losses, my then wife—whom I was working so hard for—decides she needs time and space to herself. This time and space becomes permanent…